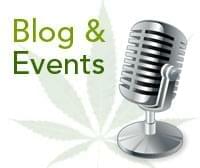 The 17th legal marijuana state has officially joined the club - Connecticut. They hope to avoid many of the common complaints of other medical marijuana states, and as a unique twist will only allow medication to be dispensed by a licensed pharmacist with an additional license for the herby medication.

We say good job Connecticut, the more the merrier, and we raise a blunt in tribute to all those who will soon benefit from the decisions of those fine legislators. Happy Medicating