Navy to Kick Out 28 Sailors For Use of Fake Marijuana 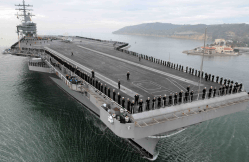 The Navy is removing 28 more sailors, after the removal of 64 sailors not long ago. The removal of the Naval members comes after they were 'caught' testing positive for smoking fake marijuana.