Why Are People Still Going To Jail Over Marijuana Possession? 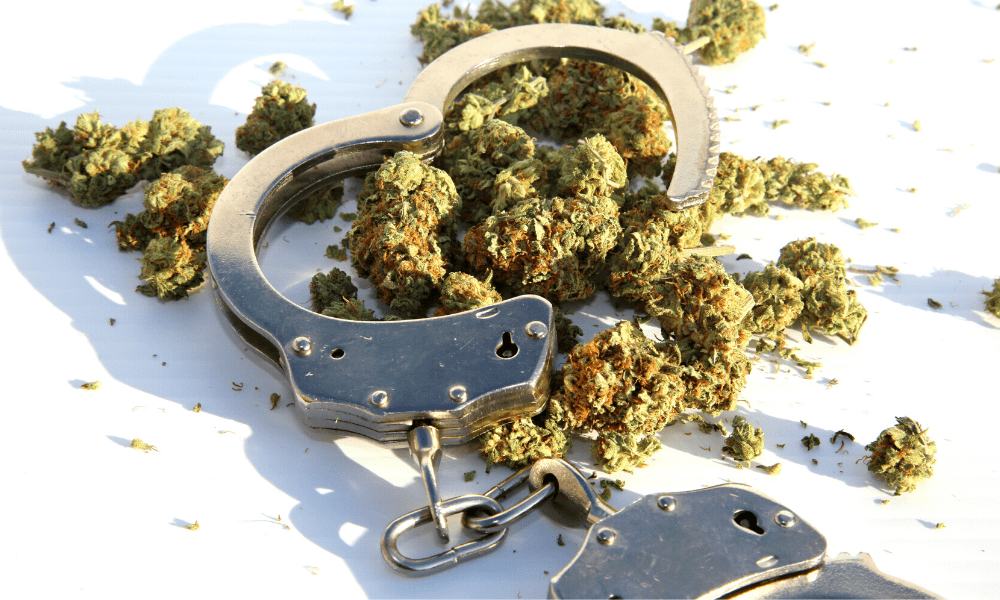 Despite continued state legalization, people are still being arrested and serving sentences for marijuana possession. The U.S. continues to enforce its half-century-long drug war that has destroyed communities and helped to misconstrue popular opinion about marijuana and the people that use it. The illegal status of weed is a concern for anyone in the cannabis community, but it's also the tip of an oppressive social iceberg that has long used drug possession to work against minorities and keep opinions slanted. In this article, we wanted to help educate on the racist backgrounds of the drug war and the pervasive racist policies that continue today.

First proclaimed by Nixon in June of 1971, the American drug war has now raged across five decades, unjustly incarcerating millions in the process. There have been dozens of large-scale drug busts throughout the past 49 years, but the most lasting impacts have largely been counterproductive to the nation's health and state of social justice.

It all officially began in the early 1970s, at a time when American troops in Vietnam were turning to heroin at alarming rates and the civil rights movement was in full swing domestically. Nixon began the war, by claiming drugs to be "public enemy No. 1," and creating the Office of Drug Abuse Law Enforcement (ODALE) to fight drug use at the street level. In 1973, the Drug Enforcement Administration (DEA) was formed, consolidating agents from ODALE, the CIA, and the Bureau of Narcotics and Dangerous Drugs (BNDD) to cement the government's attack against illegal drug use. As the 70s continued, the War on Drugs was repeatedly affirmed by the insistent presence of foreign threats like the Columbian Medellin Cartel. Such drug cartels (such as those headed by Escobar & Ochoa) would remain relevant well through the 90s. From the 1970s to 2020, the incarcerated population has gone from 300,000 to 2.2 million with 1 out of 5 inmates currently serving time for drug-related offenses.

While drugs such as cocaine, heroin, and crack have made headline news to reaffirm the drug war's relevance, the American streets have been systematically policed in the name of the War on Drugs. Arrests used to be primarily centered around cocaine and heroin, but since the 1990s, there have been more people in jail for marijuana than any other drug. Most possession of marijuana charges are against individuals with negligible amounts, and most charges are brought against minorities. According to the ACLU, despite equal rates of use, blacks are 3.6 times more likely to be arrested for marijuana possession. The Drug Policy Alliance says it best: "Higher arrest and incarceration rates for these communities are not reflective of increased prevalence of drug use, but rather of law enforcement's focus on urban areas, lower-income communities and communities of color."

In 1994, California passed the "three strikes" law. Under this piece of legislation, if someone is found guilty of a felony and has at least two previous convictions, they are sentenced to life in prison. Officially, it was enacted to "keep murders, rapists, and child molesters behind bars, where they belong." However, it has been used to put people away for non-violent crimes, such as drug possession. 28 states and the federal government have had various versions of three strikes since 2004.

A horrific example of this law's oppressive nature lies in the case of Fate Vincent Winslow, a 47-year-old homeless black man that was caught in a $20 marijuana deal. While the white dealer was never charged, Winslow was sentenced to life without parole because of two previous, non-violent "strikes." Fate Vincent Winslow remains behind bars, serving life in prison for marijuana.

The blatant racism behind the War on Drugs and the enforcement responsible for repeated injustice has placed thousands of people (predominantly black men) behind bars. Despite increased legalization, the marijuana incarceration rate has remained unnecessarily high. In 2018, there were 608,775 charged with marijuana law violations that were arrested for possession only. Overall, there are roughly 23,000 people still in jail for marijuana possession as their sole offense; and as of 2020, over 45% of nationwide monthly offenses are still drug-related.

In addition to the social injustices the War on Drugs has written, underlined and implemented, its official objectives to decrease drug use and both domestic and international terrorism have failed. In the words of the Cato Institute, "Given the insights from economics and the available data, we find that the domestic War on Drugs has contributed to an increase in drug overdoses and fostered and sustained the creation of powerful drug cartels. Internationally, we find that prohibition not only fails in its own right, but also actively undermines the goals of the Global War on Terror."

Despite the overwhelming evidence and clear trail of oppression and unjust amounts of marijuana offenders in prison, we're still left wondering why can you still go to jail for possession of weed? Unfortunately, there is no one answer. Even though only 8% of American's believe it should be illegal, marijuana is still federally illegal and only recreationally legal in 11 states. There have been, however, states willing to retroactively pardon individuals serving a jail sentence for weed. When Illinois legalized marijuana, over 11,000 pardons were provided to non-violent cannabis convictions. Other states, such as Colorado, Maryland, New Hampshire, and Oregon have all made it easier for cannabis convictions to be expunged, but it's still incredibly difficult for the majority of the population.

What To Do If You're Stopped In Possession of Marijuana

There are many facets to the War on Drugs, most of which deserve considerable contemplation, attention, and action to change. However, the simple fact remains that people are still being arrested for marijuana possession. Anyone using marijuana, in any state, is still technically breaking federal law, and travel with marijuana can still prove a risk.

Whether it's on your person or in your car, there are a few tips we suggest following. Please note that we are not advising you what to do - these are simply suggestions. Nor do we encourage breaking the law in the first place.

Because marijuana laws differ by state, it's important to know them before you travel with weed. Hopefully knowing this will keep you out of trouble in the first place.

The Fourth Amendment protects you from unreasonable searches and seizures. If you're being stopped for unrelated reasons, cops do not have the right to search your person, possessions, or vehicle - they can only do this if they have "probable cause." If an officer is pressing you to do something or show you something, you can assert this right.

Keep your calm and remember that, unless you've been caught using marijuana, officers probably do not have the right to search you. Be kind and answer their questions.

If you do get caught with marijuana, know that each state has different associated fines and penalties. Some of the worst states to get caught in possession of marijuana include South Dakota, Indiana, and Louisiana. In these states, you may end up serving years in prison and paying thousands of dollars in fines. In most states, you can probably expect a possession of marijuana misdemeanor and a fine anywhere from $100 to a few thousand dollars. However, if you're wanting an answer to the question, "how long do you go to jail for weed," there is no simple answer - there are too many determining factors to this problem. The important thing is to try and remain on the right side of the law, and to know your rights should you come in contact with police.

This isn't an easy subject. The war on drugs not only poses a risk to the cannabis community but also represents the systematic injustices of our current social and political systems. Where's Weed is, first and foremost, a community - we invite you to share your stories, experience, and opinions about this difficult (and necessary) topic. From all of us at Where's Weed, thank you for reading. Thank you for caring.