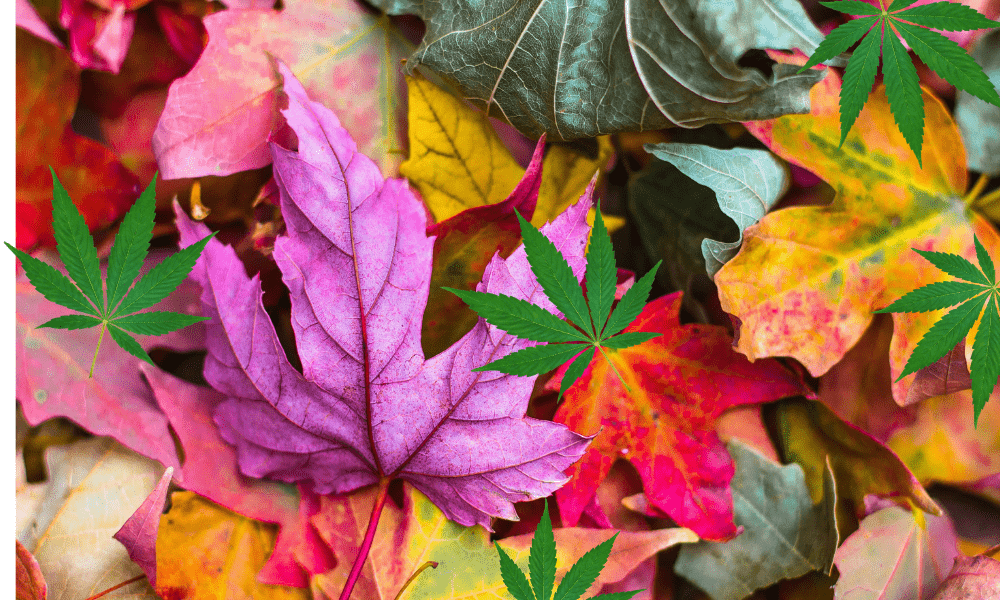 You've probably been caught up in the craziness of summer, so now it's time to sit back and slow down with the arrival of the fall season and the changing autumn leaves. Your clothes change with the seasons, so why should your weed be any different? If you feel like you've been smoking the same cannabis strains for a while now, look no further to dive into some of the best grass for this season. We've compiled a list of strains all along the spectrum for the various effects you want from your cannabis experience.

Best Strains of Weed for Fall

Find comfort in this classic strain while you ease into cooler temperatures this season. This strain is considered to be one of the best strains of all-time and even comes in at number one according to the ultra-popular cannabis publication, High Times. First cultivated in Florida, OG Kush eventually made its way to the West Coast where it took root. The exact genetics are still unknown, but many believe OG Kush is a mix of Chemdawg and Hindu Kush. It contains anywhere from 20-22% THC and has an overwhelming THC to CBD ratio. This indica boasts a terpene profile with mainly herbal notes paired with some citrus and pepper, specifically containing the likes of myrcene and limonene. This strain has a very calming and euphoric effect, with a more head-centric high than a physical one. OG Kush is hot on the medicinal market as well, so there's no wonder why it is considered one of the best strains of weed.

Another one of the best weed strains for fall is one that is quite different than most on the market. This sativa-dominant strain happens to have an extremely high CBD:THC ratio, coming in at 20:1. The THC percentage averages at 1-5%, which means that there are virtually no psychoactive effects from this strain. The genetics are traced to being a cross between Ruderalis and Cannatonic with a terpene profile consisting of mainly earthy notes, followed by some pine and a few hints of fruit as well. Due to this strain having a slight leaning towards sativa, expect some euphoric and joyful feelings when smoking this strain. However, due to its high CBD ratio, this strain is often used as an ailment for multiple issues as well as to help reduce anxiety.

Girl Scout Cookies, or GSC, is among the popular strains with quite a few effects and aromas. The genetics of this hybrid strain contain OG Kush and Durban Poison and the strain is known to be quite user-friendly. A little goes a long way, however, as GSC has a very high THC content of around 25% and only about 1% CBD. There is a skunky yet slightly minty aroma to this strain while also having some hoppy and herbal terpene qualities. This means you'll find myrcene and caryophyllene in abundance, depending on the specific phenotype. Being a hybrid, this strain is giving you the full wheelhouse of effects, with not only the euphoric head-high but also a full body relaxation as well. If you're looking for a cerebral-chill out, this is the strain for you.

This indica cross is considered to be one of the best cannabis strains today and was first propagated in Northern California with Purple Urkle and Big Bud. A winner of High Times' best American indica, this strain has a THC content of roughly 17-20% with little to no CBD. This fast-acting strain is high in terpenes such as alpha-pinene and humulene with delicious candy-like and fruit flavors of grape and strawberry. Granddaddy Purple is mostly consumed for the relaxing and sleep-inducing effects it has on the user, and is loved for combating appetite loss, stress, insomnia and muscle spasms. GDP will give you a hit of that famous grape smell while launching you into a full-on bliss that's perfect for fall.

Have you been looking through different strains of weed to give you a clear-headed feeling that you can't to find with any other strain? If so, Harlequin is the strain for you! This sativa-dominant strain has a CBD:THC ratio of 5:2 giving the user close to no psychoactive effects. However, because this is sativa-dominant, users have reported distinct alertness when consuming. Harlequin is a descendent of Colombian Gold, a Nepali indica, mixed with some Thai and Swiss strains. The flavors are predominantly earthy, with some sweetness of mango throughout which is a clear marker for an abundance in myrcene. With the current popularity of CBD only continuing to rise, Harlequin is one of the top cannabis strains on the market today. Try this strain for anti-anxiety and anti-inflammatory effects on the body, paired with a focus on a shift in perspective.

This hybrid is among the different cannabis strains that contain a relaxing and euphoric effect, perfect for the shift in seasons. Also known as Pink Cookies, this strain was created as a cross between Triangle Kush and Animal Mints. Users should be aware when consuming this strain, as it also contains a high THC content coming it at 23-25% with little to no CBD content. Wessing Cake a dynamic strain that has it all. It is earthy, tangy, and a little sweet while being high in limonene. Some even claim a subtle creaminess to the strain in the mouth while smoking, which is likely where the name comes from. Expect to feel this strain quickly, as feelings of euphoria and heightened senses kick in first. On the back end, expect relaxation and a feeling of fully tuning into your surroundings, as this is a great strain to be creative on. However, be warned - with too much consumption Wedding Cake may induce a "couch-lock".

What are some of your favorite strains of weed for this fall season? Let us know in the comments below!