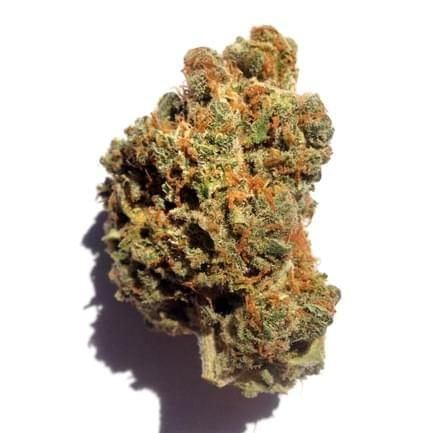 For a high that’s just as remarkable as the man it’s named after, the Jack Herer strain is one of the best weed strains on the market. Herer first published his book The Emperor Wears No Clothes in 1985 which consequently morphed him into one of the most recognizable figures in the marijuana legalization movement. While the real Jack Herer died in 2010 — his legacy lives on in the form of this strain. Genetically, this strain is bred from a mix of the strain Haze and a crossbreed of Northern Lights and Shiva Skunk. The nugs are typically dense with vibrant green with yellow trichomes and bright yellow-orange pistils. First cultivated as a medical-grade strain from Holland in the 90s, Jack Herer is one of the best weed strains for a variety of mental and physical ailments. Jack Herer has an average THC content of 20% and 0.05% CBD. This popular strain has the typical upbeat, energetic highs that sativa strains are known for along with an increase in creativity and mental clarity. A go-to strain for waking and baking, Jack Herer will give you the perfect burst of energy you need to start your day without a crash a few hours later. Jack Herer has an earthy, spicy flavor with a hint of citrus that cools someone’s throat as they hit it. Mycerene, Pinene, Limonene and Linalool are some the Jack Herer strains’ most notable terpenes.