What is Myrcene? The Abundant Terpene in Marijuana 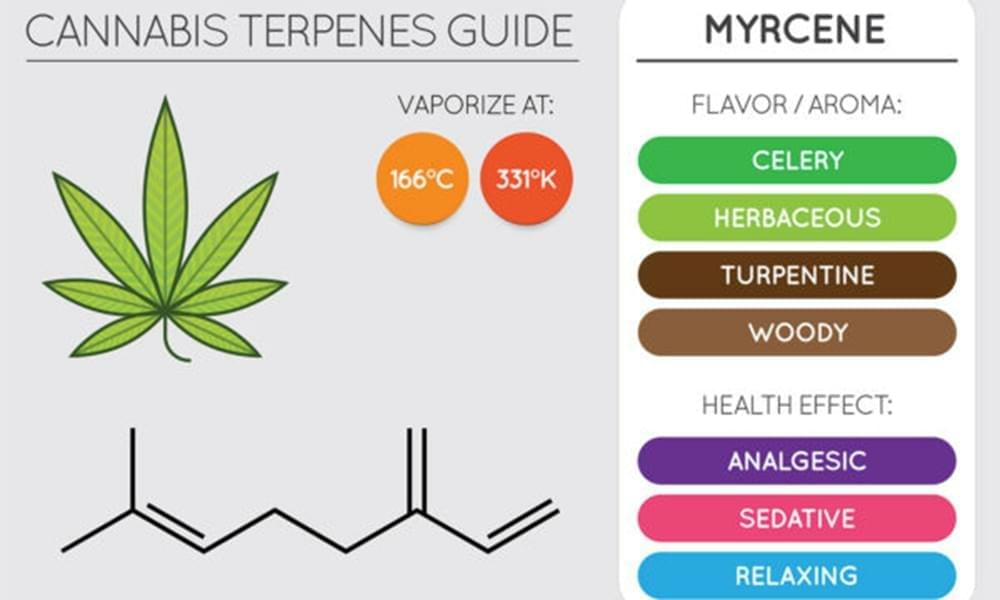 When thinking about cannabis, one of the first things that comes to mind is the dank smell it has. This aroma isn't coming from THC or CBD, but another thing called a terpene. Terpenes are one of the natural compounds found within the cannabis plant that offer not only your favorite smells but also many benefits as well. The most common of them all, myrcene, is working with your beloved cannabinoids to (hopefully) make you feel your best. In this article, we'll explore everything you need to know about terpenes and myrcene.

What is a Terpene?

Terpenes, also called terpenoids, are organic compounds that determine flavor and smell. While often associated with marijuana, they are also found in a number of other plants and even some insects. Terpenes provide defensive mechanisms with their smell, keeping predators such as herbivores away while simultaneously attracting insect pollinators. Terpenes have been used for centuries for aromatherapy uses which can greatly aid in the healing process and well-being of people. Terpenes, outside of the world of marijuana, are truly everywhere today - whether it be in your favorite herbs or essential oil diffuser at home.

Within the cannabis family, terpenes (140 of them and counting), are playing a big role in how marijuana affects the user. Marijuana terpenes are oil-based chemicals that are secreted within the glands of the cannabis flower. Specifically, they are found on the crystalline hairs on the bud, which are not easily seen with the naked eye. Seen under magnification, these terpene hairs are called trichomes, which are often sticky and shiny. Terpenes are crucial to understanding marijuana because not only do they give off very specific aromatics, they provide distinct flavor profiles and contain many health benefits while working with CBD and THC.

When working alone, cannabinoids have their own interactions with the endocannabinoid system, which is the system working diligently with homeostasis to keep us at equilibrium. When terpenes are introduced into the equation with cannabinoids, they work in synchronicity to achieve a greater effect of the cannabis. This result is called the Entourage Effect.  Essentially, when all of these things are combined, they are working to create not only a unique experience but also to achieve greater benefits than when they are working in isolation. If you want to achieve this effect, it is recommended to look for full-spectrum cannabis products or cannabis flower where you can find cannabinoids and terpenes working together.

The Most Common Terpene: Myrcene

Myrcene, otherwise known as beta-myrcene or b-myrcene, is the most common among the terpenes in weed. Myrcene is a monoterpene, which means it is an essential precursor to the building of others. It is such a key component because it allows for more absorption of cannabinoids in the brain by changing the permeability of cell membranes. Myrcene isn't just found in your local dispensary, it's in your local grocery store as well. Myrcene is abundant in common items including lemongrass, basil, thyme, hops, verbena, mangoes and eucalyptus. It has a rather musky and earthy aroma, containing some fruit flavors with a hint of spice.

Have you heard the myth about eating mangoes before smoking to achieve a greater high? Well, studies show that this actually may be true. Combining the two could create a myrcene overload in the best way possible, giving you the blissful leisureliness that you're looking for after a long day. However, nothing is definitive due to the lack of research that still surrounds cannabis.

Myrcene is working diligently within the body to produce positive results. Throughout history, it has been a holistic painkiller and is a traditional medicine used in Brazil for hypertension and diabetes. Some studies find this terpene to have analgesic effects, and is often recommended for those with migraines, arthritis and chronic pain. There are also anti-mutagenic properties to myrcene because it has naturally reduced toxic chemotherapy effects. It may even reduce the creation of the sister chromatid exchange, which is the potential marker for cancer.

Like its cousin CBD, myrcene has some anti-inflammatory properties as well, because it inhibits the organization of cells that are overproduced during inflammation, such as nitric oxide. The studies were conducted on mice, with the use of some Mexican and Korean herbs high in myrcene and the results concluded that inflammation was kept at bay.

Does Myrcene Make You Tired?

Perhaps the most common attribute of myrcene is the calming or sedative effect it can have on the user. For centuries it has been used as a sleep aid for those with insomnia, with myrcene-rich lemongrass tea being the catalyst in many instances. In a study with mice, the results concluded that with myrcene they slept 2.6 times longer while also having positive muscle relaxant effects. Myrcene is often seen in indica strains that give the "couch-lock" effect, so if you're looking to fall into a deep slumber, give those strains a try. Like many cannabis studies, these studies are currently focused on animals with the hopes of soon being able to look more at the effects with humans, so no findings are completely conclusive.

Myrcene is found in over 20% of the terpene profiles in all strains and generally plays a role in determining if the strain is an indica or sativa. A strain is a sativa if it contains less than 50% myrcene and is an indica if it contains greater than 50% myrcene in its terpenes. The strains that are high-myrcene include some of the most popular ones on the market today such as Blue Dream, OG Kush, Mango Kush, Grape Ape and Harlequin to name a few. The next time you find yourself at a dispensary, ask your favorite budtender about their favorite high-myrcene strains.

What's your favorite high-myrcene strain? How does it make you feel? Are you using it for anything specific? Let us know below.