What are Solventless Marijuana Concentrates? 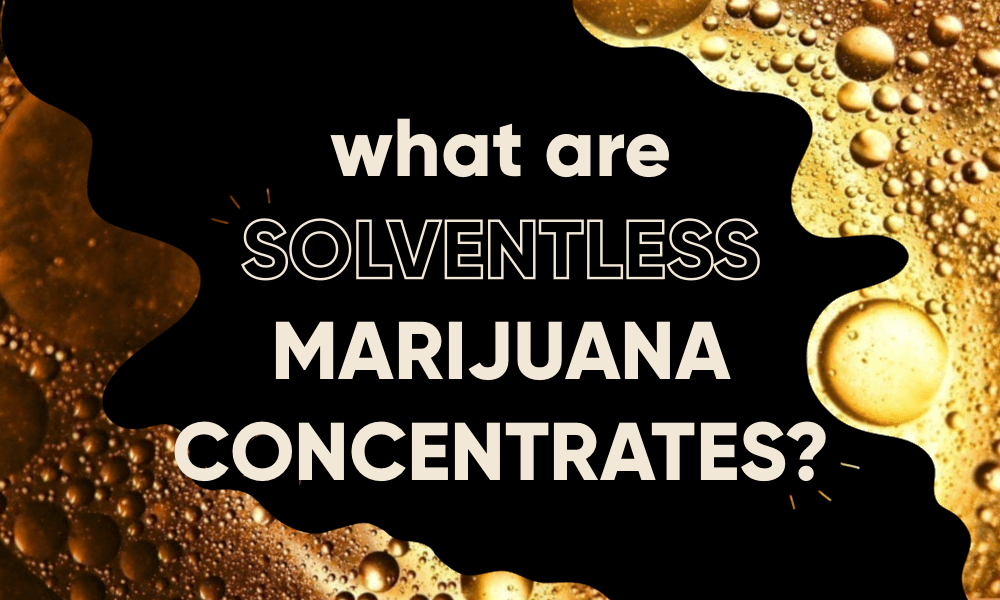 If you're a dedicated cannabis consumer in 2020 or just looking for the most direct way to get your fill of THC and terpenes, odds are you've come across dabs, concentrates or extracts on your local dispensary menu. With 2020 nearly over, it is safe to say that the dab revolution is here to stay. These days, more and more extract customers and producers are pushing butane, propane and CO2 to the side in favor of a refined version of time-tested hash making processes that offer clean, terpene-rich and THC-packed dabs.

So what does solventless THC extraction mean, what is rosin, and how is solventless shatter different from BHO wax? We'll cover all that and more, but first, let's nail down the basics of marijuana concentration.

What Is Considered a Cannabis Concentrate?

In broad terms, a cannabis concentrate is any product made by extracting terpenes or cannabinoids from the plant, leaving behind the benign plant matter and undesirable compounds. For thousands of years, cannabis farmers across the globe have turned low-potency outdoor buds into a high-powered concentrated hash. In the 21st century, as legalization super-charged the cannabis industry's research and development capabilities, extractors began using volatile solvents like butane and propane to strip off the valuable contents of the pot plant.

When most people discuss cannabis concentrate it is usually in ready-to-dab forms like shatter, wax and budder. It's important to remember that this category also includes the oil inside of vape cartridges, distillates and edible extracts like Rick Simpson Oil, or RSO. In most cases, the differences between edible RSO and BHO for dabbing is the solvent type and additional refinement steps. While BHO aims to concentrate only terpenes and cannabinoids, RSO retains a more full-spectrum array of plant compounds.

As the cannabis concentrate industry and consumer community continue to grow, a few factors have emerged to determine the quality, price, and desirability of marijuana extracts. Chief among those determinants is the use of solvents in the extraction process. BHO products made with industrial quantities of butane have become notorious for containing residual quantities of the gas. Even in legal weed states where they test every batch of extracts to assure safe levels of leftover solvents, BHO has taken a backseat to solventless extracts.

The term solventless covers every type of cannabis extract made without the use of volatile substances like butane and propane, ethanol or concentrated carbon dioxide. In most cases, dispensaries make solventless extracts by applying heat and pressure to either flower or hash. Rosin is the most popular solventless extract, made using industrial pressing machines equipped with heavy-duty metal plates that can be heated to exact temperatures. Next, they pack flower or hash tightly in a tea bag-like filter, placed between parchment paper, and then squish it in a rosin press. Finally, a viscus, golden stream of rosin oozes out of the plant material, with no further refinement or processing necessary.

On the flip side of the solvent spectrum, the term "solvent-free" has recently gained popularity. Though unlike solventless rosins, solvent-free refers to products made using solvents like butane or ethanol, but have been distilled to the point where laboratory tests cannot detect any residual solvents. Solvent-free may sound like the same thing as solventless, but for dedicated fans of rosin, solvent-free dabs won't stand up to their solventless counterpart.

Why are Solventless Concentrates So Popular?

Now that we know what solventless cannabis extracts are and what they are not, we can start breaking down their place in the cannabis marketplace. As it currently stands, solventless products like hash rosin and live rosin are the most sought-after concentrates on dispensary menus, with prices often clocking in at as high as $100 per gram. So why are extracts made by solventless THC extraction so popular?

First, there is a purity and safety issue. For some concentrate fans, taking a low-temperature dab is the perfect way to experience the complex flavors and effects that each cannabis strain has to offer. When an extract has been run through a laboratory-grade roller coaster of solvents, the delicate balance of terpenes, cannabinoids and other valuable compounds is rearranged. In solventless rosins, there is no chance that your dabs contain extra butane and your strain will taste, smell and affect you the same way the flower typically would.

Next, there is the flavor and experience. With so many new and amazing strains being grown, cannabis connoisseurs have fallen in love with the high terpene content and full cannabinoid profiles of solventless products like live rosin. By the time a BHO extraction product reaches the consumer, the strain's entourage effect is often destroyed by the solvent-heavy processing, but solventless rosins retain the plant's full profile without disruption.

Thanks to rapid advancements in concentrate production over the last few years, extract artists have discovered new ways to cure and manipulate solventless dabs into a handful of popular consistencies and final products miles beyond the days of solvent-free bubble hash.

Currently, the most popular solventless products are live budders. Typically, rosin in its classic form has a wet layer of terpenes and cake badder-like consistency. Extract artists figured out how to make budder by whipping pressed rosin with air and a little extra heat. Live rosin budders respond best to cold temperatures, leading most solventless enthusiasts and top-shelf dispensaries to store their expensive rosins in designated refrigerators.

Outside of budders, extract makers use specific temperatures and long-term curing methods to produce solventless shatter, solventless diamonds and sauce and just about every other form of dab on the market. In fact, some solventless extractors have even nailed down the perfect consistency to make solventless vape cartridges.

If you are shopping for solventless extracts at your local dispensary, they will likely just label dabs "rosin" or "live rosin" and appear in a budder or badder form. Additionally, most dabbers prefer to enjoy their solventless live rosins at about 500-550 degrees Fahrenheit, which provides both extreme flavor and a strong dose of cannabinoids. No matter what form or how hot your rig is, though, if you are a fan of concentrates, you should get your hands on some solventless extract and experience the dabs that everyone is raving about.

Do you have a favorite strain or brand of solventless rosin? Let us know in the comments below!